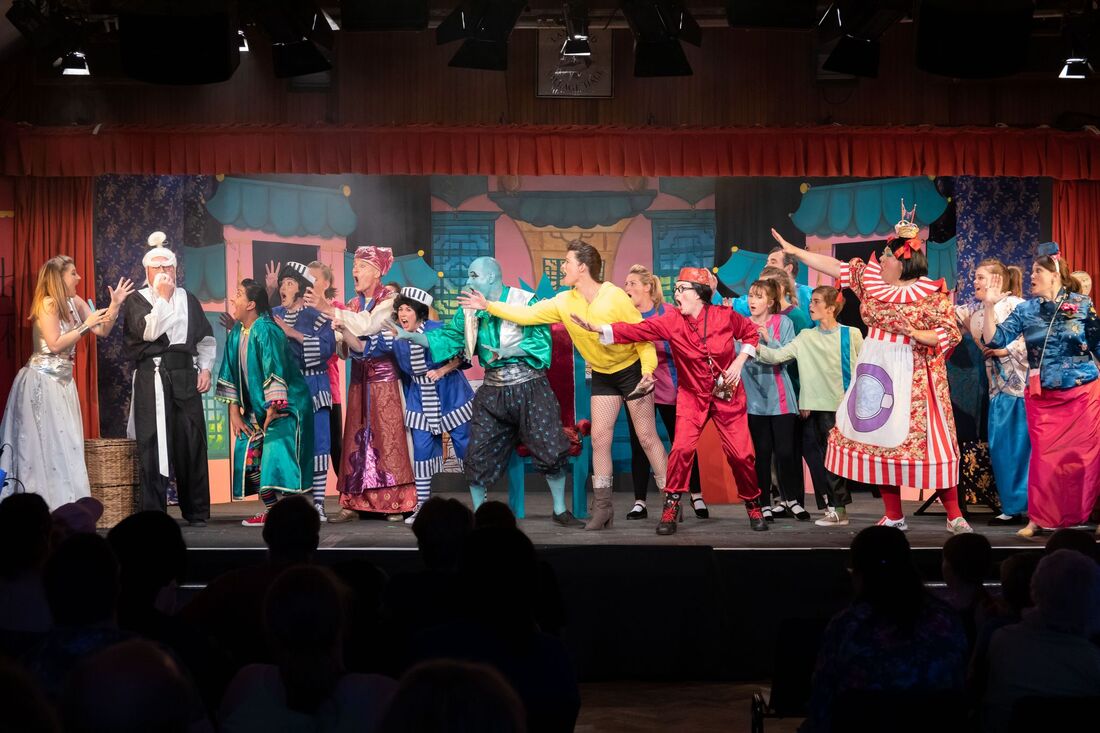 Story
Here's the fantastic NODA review for our 2022 summer pantomime Aladdin, written and directed by Catherine Everitt and co-directed by Pip Richards.

Thank you inviting me to see this production – we, in the audience, were so hot and I really felt sorry for the cast and crew under the lights!  Thank you too for your warm welcome and hospitality.  Also, congratulations on your Golden Anniversary.

A panto in July!  Well, it’s different I suppose, and I understood that, as you had had several rehearsals during the Winter, you did not want to abandon the production completely when you had to cancel due to Covid related problems!  At least you didn’t play Christmas songs!!!

Live music, always a big plus for me, and your small band were, as usual excellent – congratulations to MD Dave Bowden who, with Pete Stokes, Mike Watson and Mike Benbow, added so much to the audience’s enjoyment.
Another big plus for me is when a pantomime is written in-house because it gives the author, in this case Catherine Everitt, who also directed, the opportunity to make the most of the talents and abilities of the cast – not to mention utilizing the venue’s exits and entrances to the full - both backstage and through the audience.  Pip Richards produced and co-directed and if the result is anything to go by you make a very good and effective team.  Nearly all the traditional panto boxes were ticked too – the only ones missing being the use of UV lights for a dance and spraying the audience with either sweets or water - which would have been welcomed on Saturday evening!
The set, designed and built by Sophie Koziol, Colin Fox, David Harnett, Peter Rose and Dave Bowden, with additional help on the painting, was excellent – even though the stone in front of the cave was a tad uncontrollable! I hope you got this sorted out for the rest of your performances - but the scene inside was very effective, as far as both props and lighting were concerned.

No mention of an SM but your crew managed the changes well being both quick and quiet.
On the ‘tech’ side, lights and sound were managed by a hardworking team of 6 and were all fine – especially the sound as you got the balance between the band and the vocals just right.

Costumes were lovely, so well done to Tish Marshall, Gill Fox, Eve Berry and Georgie Brooks, albeit somewhat hot I think for some of the cast.  Sophie Koziol, Pippa Dadd and Holly Haynes did very well on your hair and makeup, especially for the two genies and for those who were cross-dressing in this traditional panto.  However, I wondered why the Dame only had one outfit and one wig?  It is more usual to see him/her in a variety of outrageous dresses, wigs and hats – particularly in the finale.  No, a pair of tiger slippers for Tiger Feet didn’t quite compensate!!
Peter Humfryes is credited for photography and poster design; did you do the programme too?  On the whole the latter was fine – but I always like to see a list of scenes and songs if possible!  I think you could have found the space - maybe by reducing the typeface used for the double page spread about the Players?

Your first number, featuring nearly all the named cast plus the chorus of seven, opened the show brilliantly – all smiling, all, apparently, totally word and movement perfect too.  In general, I do have to congratulate you on  the choice of songs – down to MD? Director? – which were well chosen and appropriate.  Too often pantomimes use some more - to me tuneless – up to date pop songs, with those responsible forgetting that the majority of the songs have to fit not only the situation but also the vocal talents of the relevant performers whilst being familiar to the majority of the audience.

Now – the cast – as usual in no particular order:
The small chorus was very good, your odd solo lines were clearly delivered in character and your moves and reactions were always spot on.  The Finale to Act I, Whatever you Want was excellent and enthusiastically performed by everyone.  A plus point awarded to you all was for smiling, not to mention the fact that you all knew all the words and moves – not always the case in pantoland I can assure you.
Kate Tysoe in the title role was excellent.  You were always in character, with some fine thigh slapping moves!  Well sung and acted and your mimed recap of events so far was very funny.  Your entry at the beginning of Act II, striding between the two carrying poles through the audience, graciously waving – you must have been watching how our Royal family do it – was most effective!
Lexy Jackman brought a well-timed element of comedy into the role of Genie of the Ring, some of which was very acrobatic!
As the Genie of the Lamp David Harnett performed very well indeed – and, David, you were just so chock full of energy!  A lovely performance.
The pair of comedy guards, Lisa Harnett and Lauren Cubitt gave us superb facial expressions – so we always knew just how very stupid the characters were.  Your comedy routines showed a good sense of timing – not always easy to get this right whilst in character.  Well played both of you.
Widow Twanky, Tom Everitt, delivered some awful puns very well, - Tom you have a good sense of comedy timing and excellent stage presence too.  My only criticism concerned the moment when things went a tad pear-shaped and you gabbled your extra line – to the effect that it was good that NODA was not present – if you had to say it, then I would suggest you would have been better milking it and speaking clearly, it wouldn’t matter that some of the audience would not ‘get it’!!
Justin Mcilveen made a very effective Abanazar – not surprised you kept saying you would watch events from the bar in view of the heat!  Your number I’m Evil was especially well sung and acted.
Alison Hartnett as your side kick Chow Mein was excellent with some lovely expressive moves which were ‘verrry interesting….’
Waheeda Jafferali played the ‘silly boy’ role very well and with terrific enthusiasm too.  You showed us that you too have stage presence, that is, you always knew exactly where you were and what your mood should be.
Nigel Bacon made a fine Emperor, and, like Aladdin your retelling of events in mime was very effective.
Princess Ping, delightfully personified by Pippa Dadd, developed some great long-suffering expressions, especially when dealing with the Emperor,
There were several smaller roles in your version of Aladdin and most of those playing them doubled as chorus members as is usual of course.
These included Rainbow Richards and Holly Haynes as Su Song and So Sing, you were both totally in character all the time, always smiling, and looking very pretty too!
Paul Brown played Mai Pai – lovely costume wig, beard and eyebrows!  An original element in this popular pantomime you added a great deal to the storyline.  I was not sure whether you sang with the chorus or not though, just as I am uncertain if Pip Richards, probably sweltering in a Panda suit in Act II doubled in the ensemble.  One who definitely did was John Nicolson who took the small role of Chancellor – you looked extremely dignified in the role too!
​
The entire show was just chock full of energy, and you all showed 100% commitment.  Many congratulations to you all and looking forward to A Breath of Spring in November! 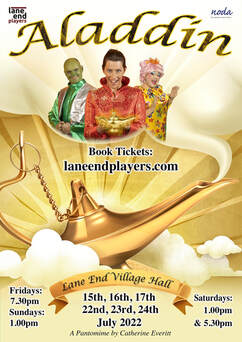