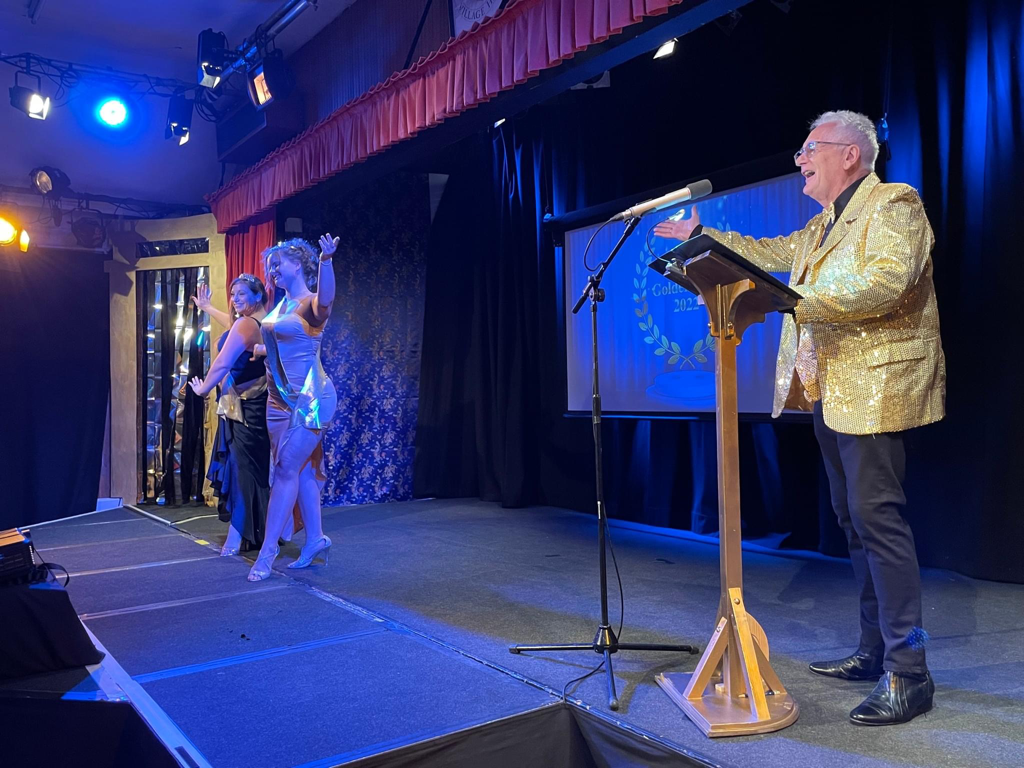 2022 has been the 50th Anniversary of the Lane End Players. In honour of our 50th year, Saturday 3rd September saw our “Golden Gala” event. This red-carpet event was a spectacular nostalgic look back at our 50 years of show, plays and other productions. Not only were our members dressed to impress but the village hall was made to look like a Hollywood award show and the organisers Ceri Nicolson, Kath Gill, Libby Beck and Tish Marshall (and helpers) did an amazing job.

The Golden Gala included an award ceremony hosted by the amazing Pete Stokes who’s witty jokes and catchphrases thrilled everyone in attendance. Pete was helped out by glamourous assistants Sophie Koziol and Jody Cook who made sure everything went off without a hitch. In honour of the village hall’s “fairy door” which all of us have used over the 50 years, the award itself was a “Fairy D’or” prompting Pete to come up with the catchphrase; “WHO’S GONNA SCORE A FAIRY D’OR”.

The award show was a great success with lots of happy winners (see the awards list, presenters and winners below). Not only were we treated to Pete’s outlandish hosting but also some funny moments from both presenters and award winners. We were also treated to a video/song from Tom Everitt, a nostalgic and comical look back the Lane End Players’ 50 years (see video below). Big shout out also to Tom Sims, Peter Humphreys and their team for the ever amazing technical element of the evening, including lights, sounds and images on screen.

The evening included a lovely meal, dancing and plenty of drinking. A great success, great fun and a great way to celebrate our amazing 50 year anniversary.

5) Stiff as a Board Award (presented by Nick Wyse)

WINNER – Georgie Brooks (and her ironing board)

6) The Most Lucious Lush Award (presented by Philippa Dadd)

8) The Most Special FX Award (presented by Lauren Cubitt)

10) Award for Contribution to Gender, Equality and Diversity (presented by Holly Haynes)

11) What a Spectacle Award (presented by Lucy Amos)

13) The Techie with the Mostest Award (presented by Lexy Jackman)

​
Here is the video and song from Tom Everitt giving a nostagic and comical look back at the Lane End Players' 50 years. The video was premiered at the Golden Gala. Song inspired by Billy Joel's "We Didn't Start the Fire" this time titled "We are the Lane End Players", enjoy.
Golden Gala photo gallery...