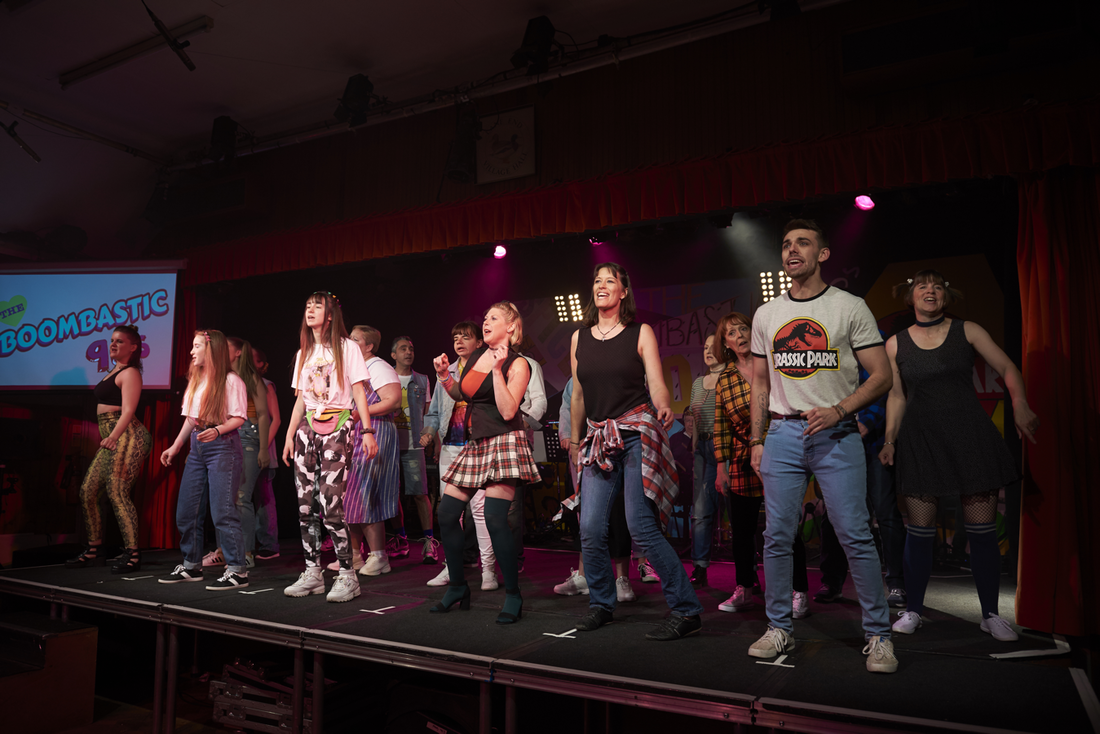 Story
Below is the fantastic glowing NODA review for our 2019 summer show The Boombastic 90s, directed and produced by Tom Everitt with an amazing band, cast and crew...

Thank you for inviting me to report on this show – the latest in the shows devised and directed by Tom Everitt which feature material from a specific decade.  I am not quite sure where you will go in future with this concept though because part of the charm comes from nostalgia for old films, events, pop music and TV programmes which is always brighter the further you get from the period in question.

Seating at tables for a cabaret event like this is always good from my point of view – somewhere to put drinks and nibbles as well as a surface to make notes on; naming the tables after pop groups worked well.

The set, Sophie Koziol, was colourful and appropriate, although the on stage live band masked some of it.   Congratulations to all five of them as well as the two sound designers and operators, Tom and Peter Sims, who never let the band overpower the vocals.  All the band members were excellent but a special mention must go to Dave Bowden whose guitar playing was superb and who also appeared in vocals and sketches to great effect.

Stewart Mason’s lights were effective and, as usual, the videos, edited by Jacob Everitt, were extremely entertaining – especially Jurassic Park (on a Lane End budget).  Very few changes required but the odd props were slickly set by SM Paul Brown, who, I noticed, also appeared in one of the sit com sketches from the period – Keeping Up Appearances.

The outfits, a large number of ‘grunge’ outfits with ripped jeans featured largely along with other suitable costumes worked well with a variety of ‘specials’ for specific items on the programme, such as the on-going ‘Ab Fab’ pair Patsy and Edina – delightfully portrayed by Kath Gill and Tish Marshall – and Austin Powers, Peter Rose you were a vision in your velvet suit!

Unfortunately Tom lost the full list of numbers and performers which he had prepared to make this reviewer’s life easier, so he scribbled an incomplete few sheets out; I apologise to anyone whose name I am unsure of and any misspellings or omissions where song titles are concerned.  As usual at these events I can only mention the highlights – of which there were many I might add.

The opening number was full of energy and well sung by everyone – just remember to smile, most of you did, and your overall enthusiasm carried on with all the ensemble numbers.  Everyone who took a solo line sang well.  It must be said that my personal favourites were Livin La Vida Loca and Perfect Day – which last I felt should have been your final number as it gave an opportunity for just about everyone involved in the show to take a solo line.

All solo numbers were appropriately allocated to the cast and sung well especially  the Britney Spears hit , Hit Me Baby, Moving on Up, Man I Feel Like a Woman, Light My Fire, Santana Smooth, with the superb Dave Dowden’s guitar solo, Robbie Williams’ hit Angels and the Spice Girls’ medley which all got multiple ticks for excellence in my notes.

As far as the comedy side of the evening went my companion and I especially appreciated the ‘Then’ and ‘Now’ comparison with your own version of Austin Powers; quick writing Tom – adding the Boris row reference!  The aforementioned Kath Gill and Tish Marshall were very funny – and Kath especially got Joanna Lumley’s walk and facial expressions off to a tee!

The characters involved in the Vicar of Dibley sketch were also excellently portrayed – have you ever done/considered doing one of the V of D plays that are available? From this particular sketch I know you can cast some of the characters!  I admit I have never seen the other show featured in this sketch so I cannot comment on the accuracy of the two FBI alien hunters.

Finally, to the sketch from the Harry Enfield Show, Tom, you got Kevin’s slouch and speech pattern exactly right as did Lauren Cubbitt as Perry.  Mum and Dad were just as confused and helpless as their TV originals too

This was, as always, an excellent evening of entertainment, and I hope you all enjoyed yourselves as much as your audience did.
​ 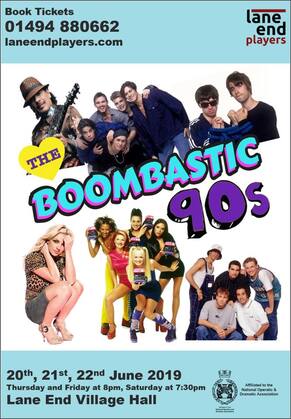