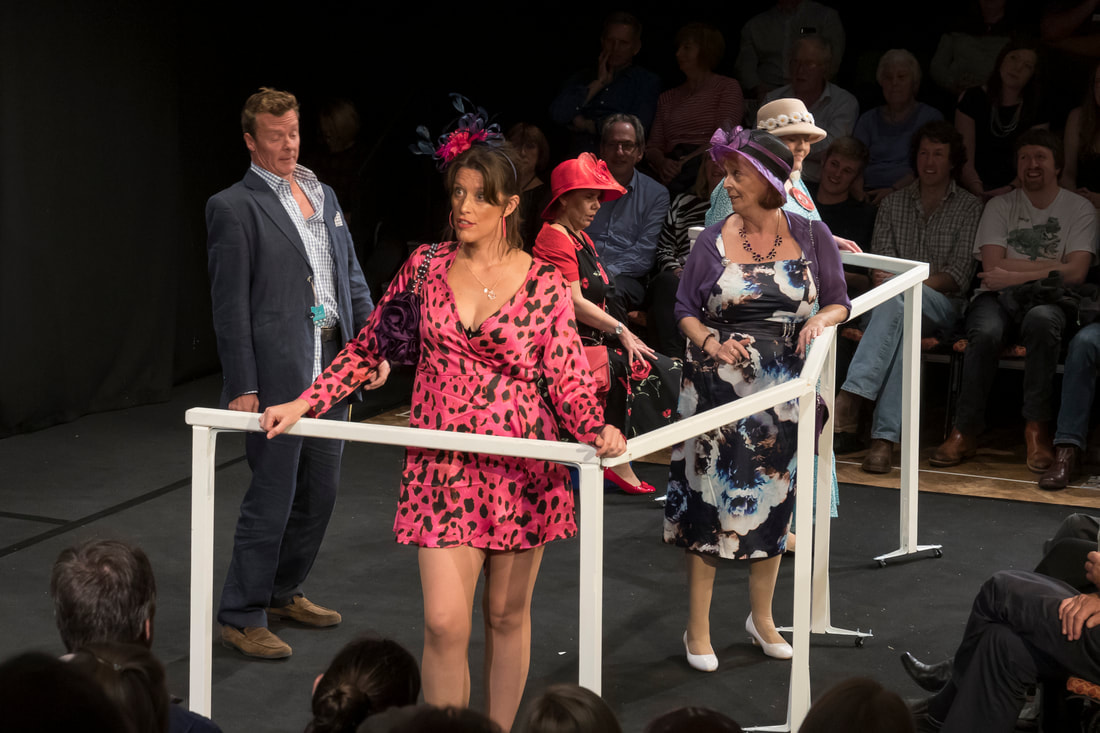 Story
Here is the excellent NODA review for our 2019 autumn production of Ladies' Day...

Thank you for inviting me to report on your Autumn production which, incidentally, was excellent, and for the nice welcome from your front of house team.  Your Director’s decision to set this in the round worked very well and I was very pleased to have the opportunity to talk to Pip Dadd about her vision for the show.  I gathered that a lot of the props are currently being passed from society to society as this is one of the most popular plays for amateur groups to perform.

So, I will start with the props; Robert Watkins and Pip Dadd assembled some excellent items, especially the fish being prepared in the fish factory.  However, I did feel that a bucket for the trimmings was missing.  Yes, I know there were no offcuts, but the imaginary bits should have been scraped off the board fairly regularly otherwise they would have swamped the fillets!

Smoking on stage these days is a problem of course – and, as it was scripted in this play, it was necessary to provide ciggies – just a thought, trick cigarettes that appear to blow out smoke work better than real, unlit ones, especially at such close quarters as were the audience on this occasion.  Your ‘champagne’ was very good and actually fizzed.

The crew managed the small set changes very well, not easy in this type of production with the audience breathing down your necks, but it was all slickly done – congratulations to both Robert and Pip.  David Harnett and Martin Hailey had designed the whole very well so that the play flowed seamlessly from one scene to the next.

Costumes, Tish Marshall for the men and Pip for the ladies, were excellent.  The white crocs worn by the fish packers were just right as were their outfits for Royal Ascot.

Lighting and sound were in the capable hands of Tom Sims, Peter Humfryes and Libby Beck – you all did a good job.  Not always easy either when setting up a rig like this and you did well.

I assume that, in the absence of a named choreographer, Pip set all the movement?  The Amarillo dance, especially, was cleverly set and enabled the ladies to change into their Ascot finery in front of us – this was most effective and you are all to be congratulated on the slickness of this operation!

The entire cast was excellent, your accents were, I was assured by my companion who hails from the region, spot on – did you have a voice coach?  If not, well done all of you.  You also managed to play almost eyeball to eyeball with some of the audience without ever making eye contact – not easy as I know only too well so well done on this aspect too.  You all sustained your very different characters believably and reacted well as your varied secrets emerged – fueled by the demon drink!

Catherine Everitt as Jan gave us one of the best, and believable drunk scenes I have seen.  A very well developed characterisation, Catherine, always consistent and you reacted well to unfolding events.

Ceri Nicolson - your performance as Pearl was superb – the scene with Barry (John Nicolson) was very poignant – especially when you realised that he had died.

Kate Tysoe brought out Shelley’s character well – the comedienne of the factory, hiding financial problems until they were suddenly blurted out.

The baby of the group, Linda, was very well played by Lauren Cubitt whose stage persona grew as the story progressed and the character became more confident.  You developed this transition very well.

Tom Everitt moved effortlessly between mime and audible speech as TV presenter/womaniser Jim.  Well done on the hectic race commentary and the very confident tic-tac demonstration Tom.  Your ‘bit’ part as a ticket tout was totally different but vital to moving the story forward.

Paul Brown portrayed foreman Joe well – good accent again, lovely moves when changing the ladies’ shoes!  A very believable performance of a man in authority with a heart of gold.

A good accent from Peter Rose as the Irish jockey Patrick.  A little too tall for a jockey I think Peter, but otherwise you looked and acted the part well – I could really see you on that winning mount!

Charlie Edgely gave us another convincing performance as the unsuccessful gambler Kevin – believably drunk, beautifully in character and you maintained this well even when it came to the final bows!

I have delayed this report because I am aware that you ran for two weekends and I do not send reports until your final performance is over!  I do hope the rest of the run was as well played and attracted as much audience appreciation as the first weekend did.

Now, as they say, to something completely different – from mid summer to the depths of winter with January’s The Snow Queen!  Do invite me along won’t you? 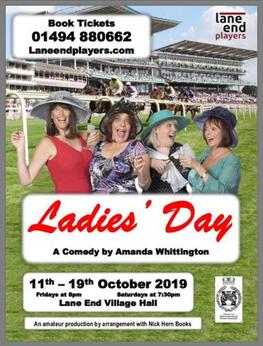