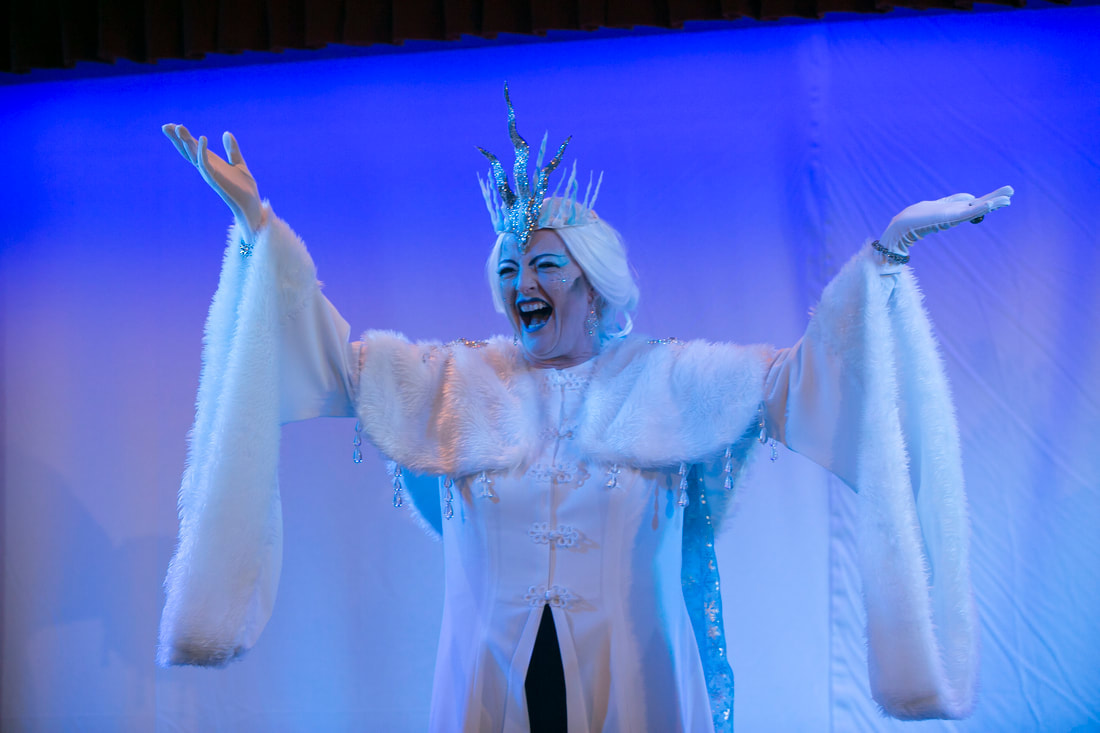 Story
NODA review for our brilliant 2020 pantomime The Snow Queen, written and directed by Ceri Nicolson.

Thank you for inviting me to report on this year’s pantomime.  As I know that performances were spread over three weekends, I will delay sending you my notes until after your final show towards the end of January.

You are extremely fortunate in that you have some very clever members who write pantos for you and this year was no exception as the talented Ceri Nicolson both wrote and directed The Snow Queen.  One huge advantage of course is that you can write to your strengths – both on and off stage; another is that you can adapt and change lines without the need to refer to the author so that you can incorporate any last minute news items – as you did to the audience’s delight with your reference to ‘Senior Royals’.

Ceri, like your other writers in the past, has a full understanding of all the pantomime traditions which need to be included to make the show work and your adult audience, on the Friday night there were very few children present, really enjoyed the entire show.  I gather that you have been fortunate enough to have virtual full houses for all six performances which just goes to show that panto and ‘amdram’ are alive and kicking in Lane End in 2020.  Good use of auditorium entrances/exits too Ceri.

The ’flowery’ puns in the script were well thought out as were the awful tennis puns!  The whole script was both traditional and up to date.  Many congratulations on this aspect.  I also liked the magic tricks exhibited by cast at the end which added a different element which fitted well with pantomime tradition.

Mike Watson, your MD, displayed a sure touch and control of the small band – a good choice of songs too

Lucy Amos and Kath Gill, your choreographers also did an excellent job.  All the dancing was excellent, especially the Me and My Shadow dance.

Lighting, under the control of Tom Sims was good.  I especially liked the way the colours changed during the original overture as the songs merged and the rainbow effect in the finale.  Liked the snowflakes projected on to the back too.

The set, built and painted by quite a large team and designed by Sophie Koziol, was excellent, especially the Spring Village and Winter Village backdrops.  A nice ‘Seasons’ clock, Libby Beck and Colin Fox, enabled Libby’s lovely puppets to be displayed to full advantage.

Sound, Peter Humfryes, was good, the wind and howling wolves were chilling SFX and the balance between band and singers was well balanced.

Props, David Harnett and Tish Marshall, were all excellent – especially the magic  tricks.

I really felt for Paul Brown, your SM, and his team – having to sweep up all that ‘snow’ in the interval.  Changes were very slick too.

Your Costume Team did an excellent job, especially Ben and Jerry’s costumes and the Dame’s and Ice Queen’s outfits.

A good informative programme from Ritchard Tysoe and the cover design was especially excellent.  I suspect Peter Humfryes was responsible for that element.  I really would like to see a list of the songs included though.

The ensemble all danced well, as I have already said, but also sang clearly and any individual lines – usually unmiked – were clearly spoken.  You were always smiling ‘out front’, movements were all well rehearsed and your diction was good in the musical numbers.

The two comics, Ben and Jerry, played by Rob Watkins and Lisa Harnett, displayed excellent timing, especially in the slapstick routine.  I loved your We will Freeze You number too.

Alison Hartnett dominated as the Snow Queen when appropriate, and, as I am sure I have said before Alison, you really do have excellent stage presence.

Your opposite number, Mother Nature, was very well played by Catherine Everitt putting over both the character, and the ‘turn back time’ number so well.

Nigel Bacon as Willie Wheeler performed very well, especially Always Look on the Bright Side of Life.  Good timing too between you and Rob with the well-timed leap, and its mirror image failure!

Principal boy and girl – Kay played by Lauren Cubitt and Gerda, Lexy Jackman paired well.  Both these roles are difficult ones in my opinion – yes they are traditional panto characters but tend to be overshadowed by the main ‘Baddie’ and the Dame.  Lauren and Lexy you played well and, most importantly, looked right – keeping in character throughout.

The sudden appearance of a group of mustachioed Spanish bandits led by Kath Gill as Fernanda was an innovation – neither traditional ‘baddies’ or ‘goodies’ they provided a whole new element which was most effective as was band member Dave Bowden’s appearance as the Sun King.

Finally, to the Dame – Tom Everitt as Lily Bloom.  An excellent performance and really outrageous appearance as always and even more outrageous ad libs – notably those directed at me as your NODA rep!  Tempted as I am not to praise you too much after your remark that you always get good NODA reviews, I cannot in all honesty fault your performance – you do make an excellent pantomime dame, possibly just because you are always on the ball and interact well with the audience – rarely thrown by small children harassing you from the audience for instance.

Another lovely pantomime from Lane End Players; I am sure all your audiences loved the show as much as my companion and I did.


And here is the glowing review from the Bucks Free Press...

Lane End Players brought the pantomime season to a lively end with their interpretation of the Snow Queen.  Written and well directed by Ceri Nicholson it made use of topical themes and gave us a feisty Lexi Jackman as Gerda proving there are strong parts for women. Her best friend Kay was well played by Lauren Cubitt.  The comedy was provided by the nimble Rob Watkins and Lisa artnett as Ben and erry Harnett as the ‘cool’ Ben and Jerry and Leeroy King made a bouncy Shorty the only tall dwarf. Alison Hartnett was magnificent as The Evil Snow Queen and Tom Everitt was a great Dame Lily with Nigel Bacon amusing as the love interest, they gave us a most enjoyable duet. The chorus were cleverly used throughout the show. The sets as always were effective and scene changes slick and the addition of a snow machine made the story more realistic. A beautifully designed clock which told the seasons housed some very funny puppets under their talented puppeteer Ellen Burnett.  The choice of music was excellent with some of the original words replaced to suit the occasion. A live band under musical director Mike Watson added greatly to the performance.  Such is the popularity of the Lane End pantomimes that tickets are hard to come by and it must be very gratifying for the cast to play to full houses at every performance. I particularly enjoyed the scene with the Banditos admirably led by Kath Gill as Fernanda with the audience invited to sing along which they did with gusto. Lighting and sound were impressive as were the special effects.
All in all this was another great achievement for the group who always offer great value. I Iook forward to their next production 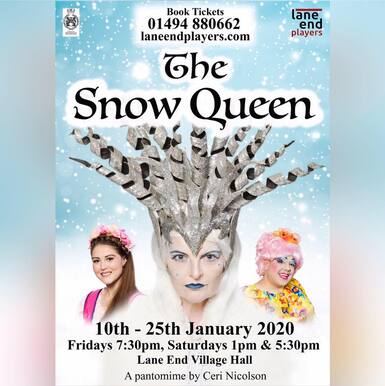