How wonderful to come back to Lane End, not once but twice this month as you gave us these two ‘2-handers’ on consecutive weekends.  I know that you rehearsed on Zoom during lockdowns and your two directors, not to mention the four wonderful members of both casts, are to be congratulated for achieving such a very high standard of performance.

Seating at tables worked well, keeping groups separated, and this also gave me the opportunity to discuss the shows with the two directors, Ceri Nicolson and Kath Gill respectively. Thank you to both of you.  I found myself sitting at the next table to one of the cast of Two for Love Letters, thank you Alison Hartnett for the extra info!  I always like table seating anyway, somewhere to park my drink and notebook!

Congratulations on ditching the Prompt!  I tend to find my heart sinking when I spot a programme credit for this role as all too often the existence of a helpful soul in the wings can lead to unnecessary reliance on assistance by some cast members.  Never at Lane End of course!

Both shows had the same ‘behind the scenes’ team and all involved had obviously worked very hard to create the two different settings.

Costumes, Tish Marshall, Gill Fox and Alison Hartnett, were well thought out and the dressers, Tish and Gill with Kath Gill had their work cut out in Two as both actors required some very quick changes.  Only two outfits needed for each of the actors in Love Letters though!

Sound, Peter Humfryes, and Lighting, Martin Hailey, were both excellent although, again, I think both of you had far more to do in Two with its constant changes of lighting and sound effects such as background bar noise and ringing up sales on the till.

Libby Beck’s set design – again this really only applied to Two was excellent.  I know from my conversation with both directors that the authors were very specific as to their requirements for the two pieces – no bar room props for example – but the stage was well dressed and interesting for both plays.

I have seen this play before but not done as you did it, and as the author intended, as a two-hander.  It really worked well as both Alison Hartnett and Ben Sansum took seven parts each.   You kept the story line going as the Landlady and Landlord respectively, bickering believably, sometimes bitterly, and then each of you then took on six very different characters, one after the other.  Accents, movements, expressions, characterisations and storylines were all well maintained by both of you.  Your mime skills were excellent – serving drinks, taking money, both to unseen characters, all very well done indeed.

Both of you achieved tremendous contrasts in the characters you portrayed – Ben’s quiet old man, for example, was succeeded by a womanizer, a loud-mouthed bully or a small boy (to name but three), the latter added a comedic touch.  The pathos Alison exhibited as an old woman contrasted so well with her subsequent appearances as a bullied wife or a blowsy mistress.  All the changes in character were achieved with a few well-chosen odds and ends – a different jacket, bag, hat, scarf or glasses said so much about the new customer in the bar.

Little things made such a difference too – notably Alison stepping over ‘broken glass’ which we knew was there because there had been a suitable sound effect for instance.

Your voices changed very subtly as your characters aged from childhood to middle age.  You both maintained very good facial expressions and vocal tones throughout too, I loved the different ways you indicated that the other had upset you somehow and you were not in any hurry to reply to their last letter – Nick with his firmly buttoned lips and Ceri gazing innocently into thin air or filing her nails.

A.R. Gurney, the author, has written a piece which reflects the period so well but it takes actors who are as talented as Nick and Ceri to make the audience ‘see’ the characters and their portrayals of their emotional roller coaster ride through life.  Your wealthy, upper class East Coast American accents were very well maintained throughout, and I can honestly say that your performances were riveting and both facial expressions added a great deal to our understanding of what lay behind the events described in your letters to each other.

Let’s hope for more and more amdram and no more destructive lockdowns!  I am certainly looking forward to receiving an invitation to your pantomime next January.  Please don’t forget – I am still regretting that I didn’t see your Darling Buds of May in the summer for this reason as by all accounts it was a very good open-air production and could have been worthy of a NODA London Award! 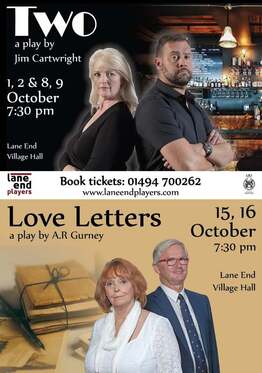